Remark: This product is not recommended for new developments.
For new projects we recommend to use the successor product,  CAN@Net NT 200

The CAN@net II allows simple, flexible access from a PC to CAN-bus systems via Ethernet. Due to its ability to support the TCP/IP protocol, the CAN@net II allows the worldwide direct connection to a PC, implementation in an LAN, or, communication with the gateway via the Internet.

The CAN@Net II/VCI is connected to a Windows or Linux PC via TCP / IP. Using the supplied CAN driver, the CAN@Net II is controlled in the same way as all other Ixxat CAN PC interfaces. Thus, all VCI-based CAN software and tools can be used in conjunction with the CAN@net II/VCI. 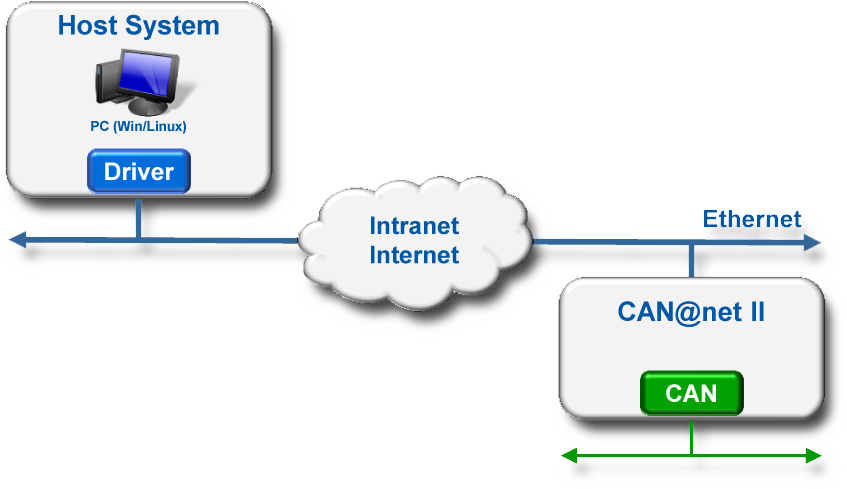 In software, the same API set is available as for the other CAN PC interfaces. The VCI CAN driver is capable of communicating via a PC with up to 128 CAN@net II devices simultaneously.

In addition to the CAN@net II/VCI, we also offer the CAN@net II/Generic. This one can be addressed via a standard TCP/IP socket or can be used as a 'CAN-Ethernet-CAN'-bridge.

Are you interested in the CAN@net II/VCI, CAN - Ethernet PC-interface? Please request, without any obligation, for a quote. Would you like more information? Please send an email to or visit our contact page.
You can call us if you like, we can be reached at +31-40-2301.922. We are pleased to help you and do offer you practical advice and support.