As an addition to the canAnalyser, the CANopen Module interprets all received CAN messages according to the CANopen specifications CiA301 (incl. SDO block transfer), CiA302 (incl. Flying Master and Dynamic SDO Configuration), CiA304 (SRDO) and CiA305 (LSS). The messages are recognized as SDOs, PDOs (also multiplexed), NMT, Heartbeat, Emergency, Sync and Timestamp objects and interpreted accordingly. 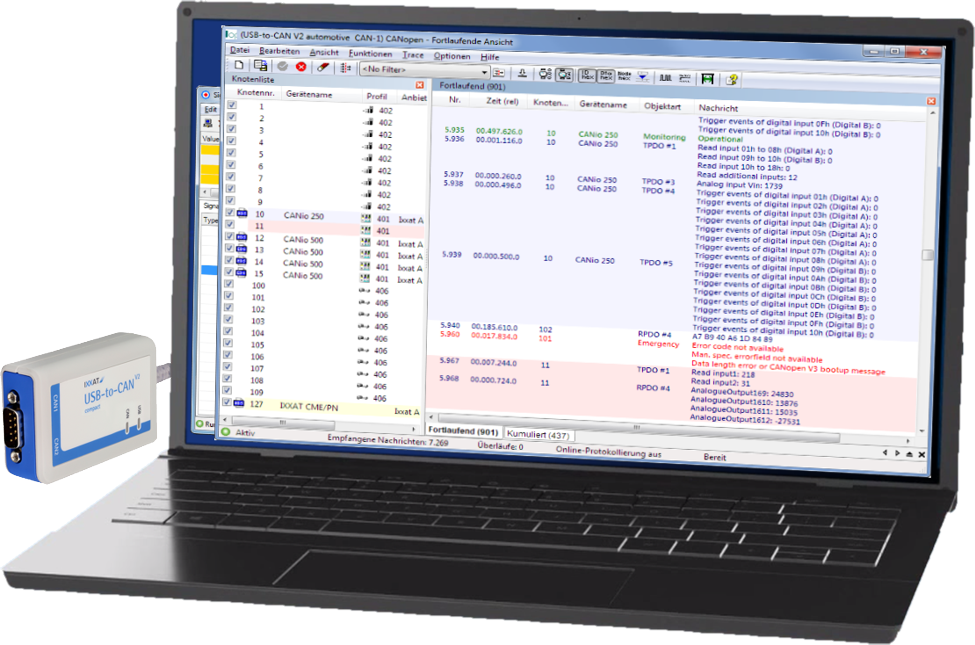 All received messages can be displayed one after the other in a list (scroll mode), or listed according to the identifier (overwrite mode), permanently overwritten with new incoming data and with highlighting of altered bytes and reception statistics. It is possible to filter the messages loss-free and dynamically according to both their node number and their message type as well as to configure the collor coding of the messages. Furthermore, the interpreted messages can be recorded to a file.

An SDO transfer is displayed with index and subindex and the symbolic name of the addressed object dictionary entry. Any abort code which may occur is correctly displayed. The SDO data can either be displayed during the transmission as subsequence or afterwards, considering the type of data, as entity. The PDO content is decoded according to the individual device or profile description.

The interpretation of the layer-2 messages is based on a network model, describing all nodes in the CANopen network. The model is generated either by loading the device description files (EDS, DCF, XDD), by a simple profile as-signment, via online network scan or manually. Furthermore, the project files of the Ixxat CANopen ConfigurationStudio are supported.

Are you interested in the CANopen Module? Please request, without any obligation, for a quote. Would you like more information? Please send an email to or visit our contact page.
You can call us if you like, we can be reached at +31-40-2301.922. We are pleased to help you and do offer you practical advice and support.

View and analyze CAN, CAN-FD and LIN communication

View and analyze CAN, CAN-FD and LIN communication