Software package for the development of Windos-based CANopen Devices

The CANopen® Master API is a software package targeted at rapid development of CANopen master applications on a PC using Windows. 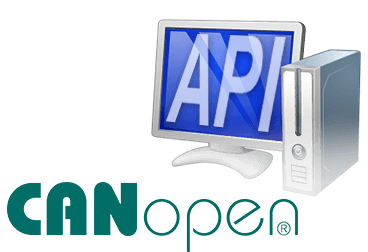 The software package consists of two components: The CANopen master software (firmware) for an active IXXAT CAN interface, and, a programming interface in the form of a Windows DLL. The firmware implements a complete CANopen master and manages the CANopen communication processes completely independently, leaving the PC available for the application program.

The application accesses data of remote CANopen devices via a function interface which supports both SDO and PDO services. Compared to an intermediate data storage in form of a local object dictionary, the advantage of this approach is that the data is immediately available to the application and can be directly processed without introducing any further latencies.

The application thus has full control of all CANopen services which allows the user to also implement complex control algorithms. Therefore, the CANopen Master API is suitable for both the development of control programs and for the implementation of service and test programs.

The CANopen Master API comes with example programs for a multitude of programming languages to enable the user to quickly develop CANopen applications in his preferred development environment.
Directly supported are:

To allow usage of the API on passive IXXAT CAN interfaces CANopen Master API is shipped with software modules encapsulating the processing of the CANopen protocol in a library executing on the host PC.

Are you interested in the CANopen Master API? Please request, without any obligation, for a quote. Would you like more information? Please send an email to or visit our contact page.
You can call us if you like, we can be reached at +31-40-2301.922. We are pleased to help you and do offer you practical advice and support.