The IXXAT CANopen® Device Manager is a versatile and upgradeable tool aimed at device test, diagnostics, and field service tasks. Built around a central component that manages the CANopen services while serving as the primary entry point for network definition, the CANopen Device Manager covers functionality like NMT node and error control, SDO client (including block transfer with CRC), PDO producer and consumer, SYNC and time stamp producer. It also offers concise DCF, firmware download according to CiA 302 and LSS master according to CiA 305. 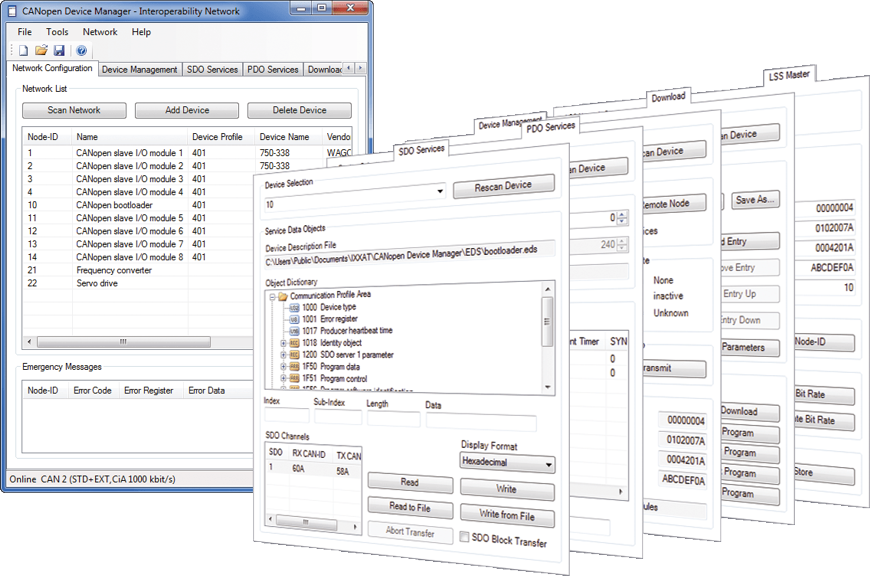 The highlight of the IXXAT CANopen Device Manager is the support for plug-in modules that can be tailored to specific requirements of CANopen devices and systems. Plug-in modules can be dynamically installed at run time and can integrate seamlessly with CANopen Device Manager. They may either implement a high-level abstraction of functionality as described in the CiA device profile specifications, or, provide an entirely customized graphical user interface optimized for the specific requirements of device commissioning or maintenance tasks performed by a service staff.

Direct device access is supported by means of SDO (normal, expedited, and block transfer). From the user point of view, SDO access to the device is considerably simplified by an object dictionary browser. Large data blocks can be directly written to or read from a file, and can be optionally displayed in a separate dialog with both ASCII and hexadecimal representation.

The CANopen Device Manager supports PDO read and write services as specified in CiA 301. During a device or a network scan, all possible PDOs of the detected devices are uploaded and both communication and mapping parameters are displayed in the form of a summary list. To allow for diagnostics and testing of synchronous PDO transmission, the CANopen Device Manager supports single-shot or periodic generation of SYNC message according to CiA 301, with adjustable time periods of 1ms.

Are you interested in our products? Please request, without any obligation, for a quote. Would you like more information? Please send an email to or visit our contact page.
You can call us if you like, we can be reached at +31-40-2301.922. We are pleased to help you and do offer you practical advice and support.