Ixxat Econ 100 is a stand-alone controller / embedded PC for real-time Industrial Ethernet, suitable for many applications – from small material handling devices to complex robot-based systems.
Econ 100 is more powerful than a PLC but economical than an industrial PC. 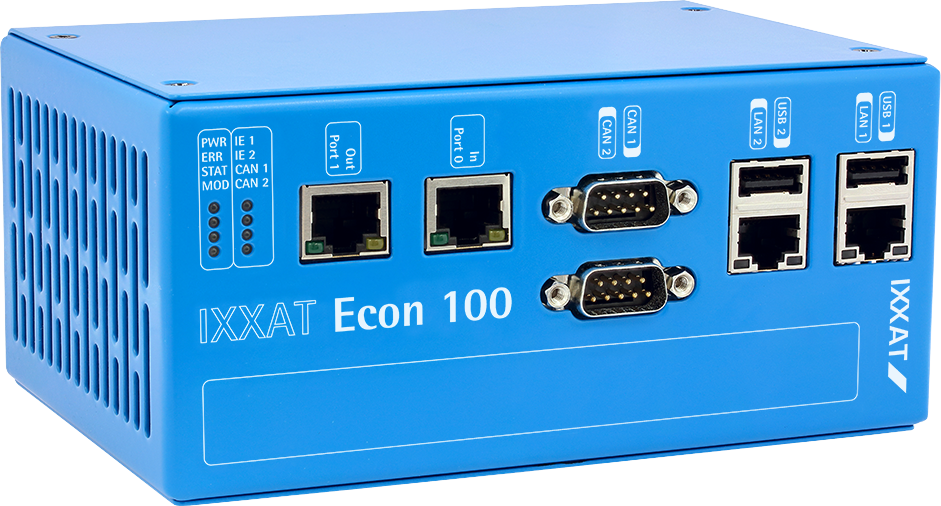 The Ixxat Econ 100 is a powerful ARM-based embedded PC for top-hat rail mounting with Linux operating system. Its unique modular concept enables you to easily extend the existing interfaces and functions, allowing to adapt the device to your specific requirements. Customized gateway and control solutions can therefore be swiftly and easily implemented for a variety of different fieldbus and industrial Ethernet standards.

During the development of the Ixxat Econ 100 controller special attention was paid to the requirements of the various fields of application. Thus, the device has a powerful CPU, industry-grade memory, a rugged metal casing as well as a fanless design with an extended temperature range of -40 °C to +70 °C.

Ixxat Econ 100 uses a dual-core Cortex A9 CPU. The internal RAM has a standard size of 256 MB. Operating system and programs are stored on flash memory on a SD card. 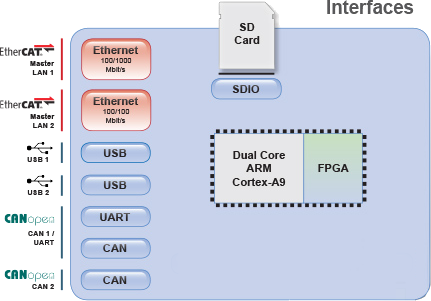 The basic version of the device has each two Ethernet, CAN and USB interfaces. Expansion of interfaces and functionality is provided by HMS as customized development service.

The unique modular concept of the Ixxat Econ 100 enables you to easily extend the existing interfaces and functions, allowing to adapt the device to your specific requirements. Customized gateway and control solutions can therefore be swiftly and easily implemented for a variety of different fieldbus and industrial Ethernet standards.

For the EtherCAT master functionality the proven EtherCAT Master protocol software from acontis is used. The specially optimized link layer enables the Ixxat Econ 100 to operate with cycle times of less than 1 ms.

The selected EtherCAT master implementation, the included interface drivers and the pre-installed Linux operating system enable rapid implementation of customized EtherCAT application as well as the rapid adaption of existing applications to the compact and powerful Ixxat Econ 100.

The Ixxat Econ 100 is also a perfect solution for the connection of several EtherCAT networks, e.g. enabling the operation as EtherCAT master in one system and at the same time as EtherCAT slave in another network.

For the integration into CANopen networks Ixxat offers a customized multi-channel variant of the proven Ixxat CANopen master/slave software. This allows the rapid implementation of controllers for CANopen networks, as well as the use of Ixxat Econ 100 as gateway or measurement node.

Are you interested in our products? Please request, without any obligation, for a quote. Would you like more information? Please send an email to or visit our contact page.
You can call us if you like, we can be reached at +31-40-2301.922. We are pleased to help you and do offer you practical advice and support.