Software package for the development of CiA302 / CiA 303 CANopen devices 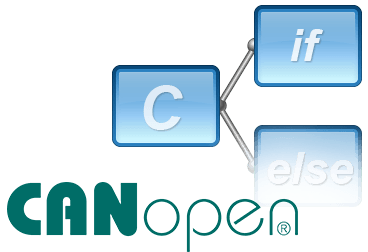 The bootup manager implements the boot up behavior of a CANopen network as defined in CiA 302. The manager can be configured to check for mandatory and optional devices according there device types (0x1000) and identity data (0x1018) and inform the application about all devices.

The configuration manager is able to check if the devices are configures as expected and if not, it can start a configuration process automatically. Configurations may be read from DCF files or Concise-DCF files.
Of course all CANopen master services as defined in CiA 301 are included. Generally, the CANopen manager stack should be used if the CANopen network is very dynamic with a varying number and types of CANopen slaves.

A flexible user interface provides functions to evaluate the received data and to use the CANopen Manager services in the network.

Besides the function API there is also an Mailbox API available for an easy use with multiple tasks resp. threads. Messages between application modules and CANopen Manager stack are send via mailboxes instead of function calls. This secures a non-blocking communication. An application may consist of several tasks that use the CANopen Stack in parallel.

To save resources the CANopen Manager Stack is widely configurable and scalable. The settings for these features are supported by the graphical configuration tool, CANopen DeviceDesigner, which also allows the creation of the object directory and EDS file using a built-in database. As a consequence, changes can be realized fast and easy.
Using the unique CANopen DeviceDesigner valuable development time is saved.

Many ready-to-run examples are provided to make the start with the CANopen Manager stack as easy as possible. Additionally a user manual, which describes principles and use cases and a reference manual, which describes each API function in detail belongs to the scope of delivery. The stack is constantly tested with the CANopen Conformance Test for compliance with the specification.

The CANopen Manager Stack is delivered as source code in the form of a one-time Project or Site License. The distinction between them is as follows:

Are you interested in the emtas CANopen Manager stack? Please request, without any obligation, for a quote. Would you like more information? Please send an email to or visit our contact page.
You can call us if you like, we can be reached at +31-40-2301.922. We are pleased to help you and do offer you practical advice and support.